For more information on Jimmyjibs, Steadicams and cameras in general see my website
email: joe@joesjibs.co.uk

You may be familiar with the system. You simply lay down the tubes, and the dolly-wheels govern the track-width by gripping the tubes. It’s light, very quick and easy to assemble, and it collapses to manageable dimensions. Mark you, no matter how simple a system may be, you still have to transport it, assemble it and lay it down. And when you’ve taken the shot you still have to dismantle it and reload. There’s a whole lot more messing about than merely erecting a tripod. It’s an extra workload, and it’s a lot easier not to bother.

So why bother? So that your camera can perambulate through dizzy, visual excursions? So that you can thrill your audience with fences and railings marching across the screen? Oh yes, you can do all that, too. But there’s a much better reason - Temporal Parallax. 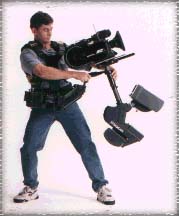 In everyday life we perceive the world in three dimensions because we view it through two eyes set slightly apart. This is Spatial Parallax. It tells us where we are, and where everything else is, and we use it unconsciously, and with great accuracy, throughout our waking lives. But the video camera has only one eye, and the result is a flat, two-dimensional image. Temporal Parallax allows us to endow a flat image with perspective-information.

‘Temporal’ denotes time, and Temporal Parallax is the sense of depth we perceive during the time in which the camera continuously shifts its viewpoint. We experience Temporal Parallax when viewing a scene from a moving vehicle. Close objects move very quickly, distant objects move more slowly, and those between move at varying speeds relative to their distance. A tracking camera employs the same principle, and the resulting image, while still two-dimensional, contains a continuous stream of information, which feeds the eye-brain with depth perception. 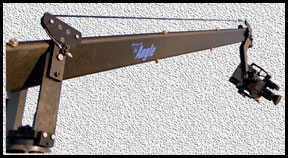 This is how it works. Whereas a person observes
from two viewpoints, simultaneously, the tracking lens observes from a series of different viewpoints, one viewpoint at a time. The brain knits all this together as perspective because it continuously remembers where an object was a split-second ago, while observing where it is right now. It’s not actually a three dimensional image. It’s a mental process of interpretation.

Of course, camera track. shots cover much less ground than a speeding car - typically just a few metres. But it’s more than enough. In fact, the most frequently used track shots are short excursions, especially for giving depth to small subjects in close-up. Take a bouquet of flowers, for example. This is a difficult subject with a static camera. Even in good lighting, the blooms get scrunched together. But if you track slowly past it, every component petal and leaf separates from the next. Through Temporal Parallax the subject
gains depth, and becomes crisply visible.

You don’t have to jump up, right now, and find a bouquet to prove it - just think about it. Think about any subject. Look up at the room in which you are reading this, and track your cameraman’s eye  through the scene. See how every item of furniture makes a movement relative to its distance and becomes optically detached - from every other item? It’s not magic, but I can’t think of a better term.

Let’s be clear about panning. Panning does not produce Temporal Parallax. Yes, the lens moves across the scene, but it is merely a swivelling movement from the same viewpoint. The result is a two-dimensional image sliding across the screen with no added depth-clues. It ain’t the same thing.

It’s interesting to realise that when you view the world from a moving vehicle, virtually everything you see is visually in motion. The motor car has so accustomed us to this experience that we are scarcely aware of it. But if you take the trouble to study what is happening, you will observe that you yourself are static, and the solid planet around you is in giddying fluid motion.

It’s worth remembering that your camera lens is at the centre of the universe only in terms of its own viewpoint. Everything in the world has its own, different viewpoint, and everything ‘views’ everything else, including your camera, from its own spatial epicentre. If you track the camera through a woodland scene, Temporal Parallax gives you a clarified view of each tree’s spatial relationship to every other tree. Simultaneously, every tree gains a clarified perspective of the camera’s position among the trees.

You may think this is getting too close to Einstein’s Theory of Relativity, but there’s a point. Remember that when you point your camera, the lens does not reach out to capture the scene; it’s the other way around - the scenic information comes to the lens. The lens merely receives the light which the scene projects to it, and when the lens is tracking, the scene delivers a changing set of light rays, obligingly showing us a different face. Thus there is a valid sense in which it is that the scene moves. This is fanciful in purely logical terms, but people who work with video images -have much to gain by sharpening their perception of relative movement.

Consider a scene in which the trees are moving; dancing around a static camera in a swirling arabesque. In this, Temporal Parallax is imparted, not by camera movement, but by the movement of the subject - the trees. So it is that, sometimes, a static camera image gains perspective by default through the motion of the scenes own components. Trees don’t often oblige the cameraman by uprooting themselves, of course, but the world is full of objects that move - dancers, pedestrians, athletes, traffic, animals, etc. Moving subjects are nearly always a bonus, not just for the dynamic action they give to a scene, but also for the parallax-perspective they impart.
The lesson is that you should be alert to any inherent movement in a scene, and be ready to capitalise on it. How? By taking up a camera position which will maximise the depth-effect of moving objects. Clearly, objects approaching or receding from the camera give a greater depth-effect than those which move laterally across the scene.

If the scene is numbingly static, and you don’t have the means to track the shot, you should introduce some subject-movement. Simply walking a person through the scene helps to give it depth.

Some notoriously difficult subjects fortuitously produce Temporal Parallax when subjected to wind. Take a field of wheat. In the absence of wind-movement this subject is almost impossible to shoot without tracking. The static lens merges every plant into the next, and sees an almost unintelligible texture with virtually no colour separation. This is worse than a simple lack of perspective; the very quality of the image is degraded beyond usefulness. Panning and tilting achieve nothing; zooming and differential focus make it worse.

But when the wind blows, the image is astonishingly different. Every plant goes into motion, and smiles back at your static lens from a continuously shifting viewpoint. It is not just that the crops become animated - they become visible. So you don’t always have to move the camera in order to achieve Temporal Parallax. Sometimes the subject-event will do it for you.

With a small object (that bouquet for instance) you can introduce subject-movement artificially by rotating it in front of a static camera. We’ve been using a record turntable for years. It’s wired to allow an infinitely variable speed. The effect is sensational since the camera’s relative movement is orbital.

The question arises - Is inherent subject-motion a substitute for tracking? Well, it gets you off the hook. But a dedicated moviemaker is not content with that. If you want the shot to be not merely acceptable, but gorgeous, you’ll combine as many positive factors as possible. You’ll wait until the sun is shining, and the wind is blowing, and still you’ll track it. So the answer is - subject-generated parallax works and camera-generated parallax works. Combining both is likely to work even better. 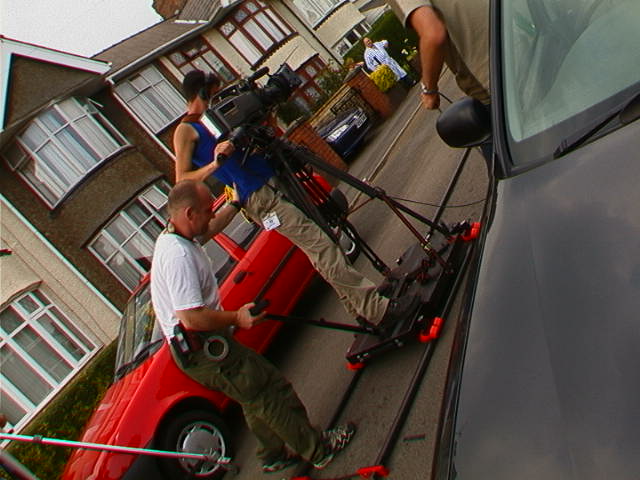 In speaking of tracking, so far, I have been referring generally to crabbing that is, moving the camera sideways, and creating a view much like that we see when looking out of the side window of a vehicle, rather than through the windscreen. But a camera can equally well be tracked forwards or backwards along the axis of the lens.

On-axis tracking often produces an even greater depth-perception than crabbing, especially if the camera’s journey causes it to pass close to component-objects in the scene.

Let’s be clear about zooming. Zooming is visual travel along the axis of the lens, but it does not produce Temporal Parallax. Yes, it approaches or recedes from the subject, but only through magnification. It enlarges or contracts the same flat image without giving any depth-clues - even if you combine the zoom with panning. It ain’t the same thing.

Temporal Parallax, whether produced by camera motion or subject motion, is not the only means by which we can gauge depth. Even in a static viewpoint there are often clues to help us sense perspective - the apparent relative size of objects, light patterns, shadows, differential focus, atmospheric haze, and so on. But Temporal Parallax does a much better job than all of these combined, and is second only to- a full stereoscopic image. Perhaps, one day, we’ll all be shooting 3D video, and our images will all have in-built perspective. Until then, we have the technical need and the creative responsibility to use whatever techniques are at our disposal. Temporal Parallax is one of the most vital, and tracking gear, dollies, jibs, steadicams etc.  is what enables you to achieve it.

FOR ARTICLE ON USE OF JIMMY JIB CLICK HERE

There’s only one more device you need in order to achieve the complete range of camera movement techniques - a jib. A jib is a wonderful piece of kit. It allows you to crane the camera, up or down, vertically, or in a diagonal plane, swing it laterally about the jib’s horizontally-swivelling mount, and pan and tilt - all at the same time if you wish.

Even in static shots it is immensely useful. You can shoot from a very high viewpoint, or a very low one. And, most usefully, you can position the camera close to a vertical obstruction such as a wall. I used this recently to shoot a person standing at a kitchen sink. Most sinks, and many other workstations, are sited against a wall, and the jib is the only mount that allows you to see the face of a wall-facing operative.

If that isn’t enough, yes, craning generates Temporal Parallax, and can deliver equal depth-perception as horizontal tracking or more, depending on the nature of the scene’s component-objects. If you mount a jib on a tracking dolly, you can crane and track simultaneously, and thus produce a combination of vertical and horizontal parallax so that perspective is almost tangible.

The universe is governed by certain absolute constants - there are only so many ways in which a body can change its geometric position and attitude in space. With tracking and craning equipment at hand, we, as much as any Hollywood studio, are equipped to exploit every option. Einstein’s universe has a fourth dimension, of course, time. That’s what we’ve been thinking about here - camera movement and subject movement in the temporal dimension.

For more information on Jimmyjibs, Steadicams and cameras in general see my website